This article is over 7 months old Twitter users complain after Charlie Ewels, Ruben Loftus-Cheek and Jake Livermore kneel during Tottenham’s home game against Yeovil Why England players taking the knee is proving so… 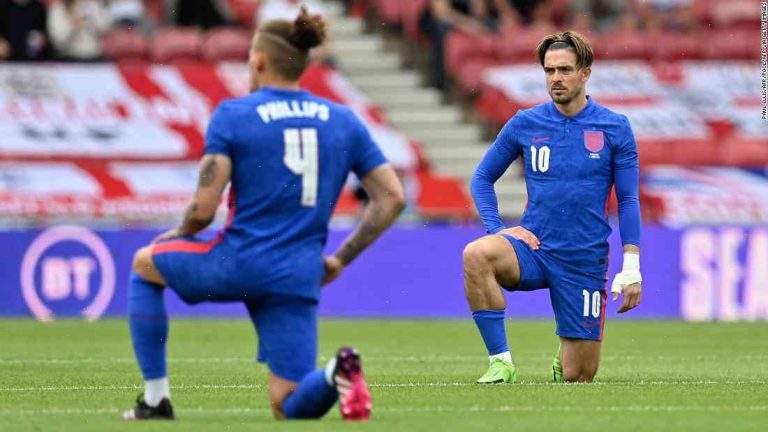 This article is over 7 months old

Twitter users have been sharing their feelings about England’s players kneeling during the national anthem before their Champions League game against Real Madrid on Tuesday night.

The three men – Ruben Loftus-Cheek, Charlie Ewels and Jake Livermore – who started the game in Marbella, Spain, were joined on the pitch by the team-mates Kyle Walker and Danny Rose during a change of ends before the game, raising their fists while stand-up stances were made.

Jake Livermore (@JakeLivermore) 24 hours ago it was all about the poppy round which was so touching. Today! 🐶 pic.twitter.com/wvoa4AbXzS

While people are divided by the players’ display, other viewers were unhappy that the players had decided to stand in their stance.

James Cooper (@james_cooper) Anyone got a problem with Livermore kneeling? He comes from a state whose constitution is #ProudToBeImmune to hate based on race, creed, religion, orientation, life ambition.

Anonymous England fan (@HattonPVC) When did being a bit of c*** become a message of unity, solidarity and strength?

Anonymous England fan (@HattonPVC) If any of the players taking a knee are fearful of anyone they would do well to watch @DarrenDarren’s interview from Basingstoke on @WorldFootball. It makes a stark contrast with the current state of a supposedly united England.

The England players were once deemed immune.

They are now hurt and wounded and worthy of being insulted by racism.

Anonymous England fan (@HattonPVC) Why do they take part in this crap? it’s pretentious, immature and embarrassing to their own country.

Anonymous England fan (@HattonPVC) Our best players if their best?

What a load of rubbish.

So today Football Federation are going out of their way to try and forge unity when every game seems to polarise — Anon England Club (@ScotsDFB) August 29, 2017

A video of them kneeling at the start of the match has since been shared on social media by the account @scotsdfb, which shared a message saying: “Lots of guys from what I’ve seen didn’t even know it was an issue.”

Satirical news outlet the Daily Meal also published a screenshot of them kneeling as part of the national anthem, captioning it “We’re not gonna stop until all these cunts call this a protest, not like they want to and not like they wanna, they want football back.”

But despite some taking issue with their displays, supporters were largely pleased by the players’ display.

For Michael Hanke, synthetic biology is “a new type of biology”