I first encountered Pecco Bagnaia at a shindig celebrating the naming of the Elite 24M1 road race course. It was, as I recall, deep, chalky weather at the time, perfect for bike racing. I… 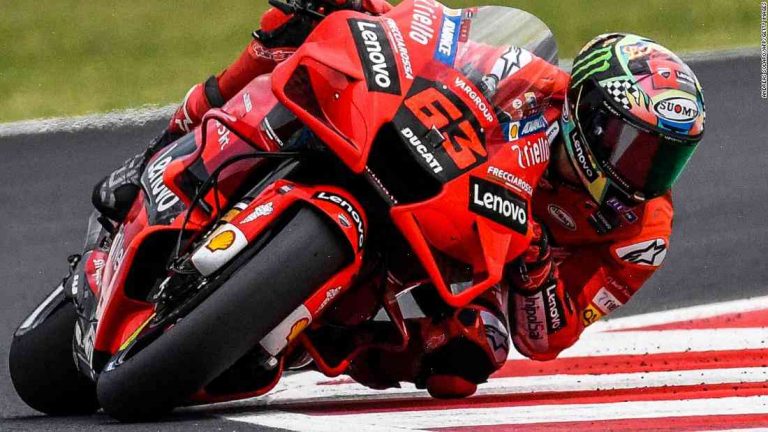 I first encountered Pecco Bagnaia at a shindig celebrating the naming of the Elite 24M1 road race course. It was, as I recall, deep, chalky weather at the time, perfect for bike racing. I don’t think I ever saw him run a corner, but as I tried to relax in the bitter chill, I could listen to him harken back to his illustrious racing past, as he spoke about his feelings and interests, and the guys he and his fellow riders shared that day.

With his trademark tool of the trade: a steely gaze, just like Grandpa would have pulled from his elbow.

That night, out and about, I watched as Italians descended upon Western North Carolina with motorized powerboats, visiting, parading, and sampling their feast. Bagnaia, it seemed, was everywhere. I’d met him before, back at the Sports Country setting in the first days of the season. A nice guy, though he did shun my offer of a free bite of his special Italian pizza, the one the whole world seems to love and miss.

But that other type of guide, Mr. Nice Guy, is not considered a worthy match for the Italian, who has a penchant for leaving old friends like me behind. This time, I kept a good distance, and I appreciated the distance because I knew he was far enough away from me to remain a mystery.

Bagnaia has grown this year to occupy the middle position in the MotoGP rankings, never a bad thing for a rider jockeying for a place in the championship. This weekend, he will try to regain a spot he had achieved two years ago, when he finished in the top 15 for six consecutive races before the leaders passed him, condemning him to a finishing position of 22nd in the final standings. But being of presentable quality hasn’t been enough, this year, for a riding style that puts more emphasis on aerodynamics than aggression. He’s expected to be on the back nine as he continues his climb out of this undistinguished place, a development that will give more hope to the motocross forces backing other riders and pressing for more podium positions.

I’m rooting for the young man, who is the first Italian to make the MotoGP grid since Michele Marini in 1987. To see a young man who’s made something of himself, more on the way, and for him to be Italian, who’s made an impact and deserves our world admiration, we have to feel a connection. So when a guy like Alonzo Gallardo comes to the States, and gives a passionate interview, having the ability to fight for points. . .