Explosion in Mogadishu leaves at least 11 dead, over 45 injured

A large explosion has rocked Somalia’s capital, killing at least 11 people and injuring 47, officials said. TV footage of the capital showed a large crater in the road outside the police headquarters. Shops… 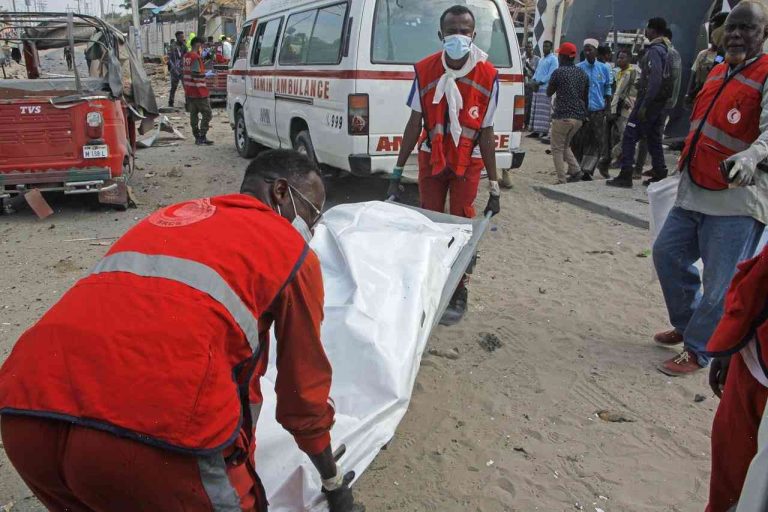 TV footage of the capital showed a large crater in the road outside the police headquarters. Shops nearby were damaged.

Shafiul Ibrahim, a spokesman for Mogadishu ambulance service, said that 11 people were killed and 47 others were injured in the blast, most of them police officers, who were in a passing convoy.

“We received the dead and injured at the scene and are carrying them out to different hospitals,” Ibrahim said.

Wale Aden, a driver whose car was wrecked in the explosion, said he saw people — including civilian passers-by — running from their homes in panic. “There is chaos. Everyone is on the street seeking a safe place to stay,” he said.

The blast hit during peak evening rush hour, when hundreds of civilians would usually be on the streets, said Abu-shukur Mahamud, a resident. “The blast happened a little after 7 p.m., close to the police headquarters,” he said.

A scene photo provided by the National Intelligence and Security Agency showed a vehicle burnt out, its windows blown out.

Somalia has been plagued by anarchy and violence since 1991. The al-Qaeda-linked al-Shabab extremist group continues to carry out suicide bombings, primarily in Mogadishu. The group often targets government officials, hotels and military installations.

The World Food Program said that many Somalis lived in the roads around the police headquarters. “WFP aims to reach up to 500,000 people in Mogadishu and those areas that are too dangerous for emergency relief,” it said.

Somalia’s political crisis has brought a rise in abductions of foreigners, including aid workers. The government and its African Union partners have pushed back against the abductions, which started last December and have included Americans, Europeans and at least one Somali official.

Tensions have risen since September’s announcement that Omer Abdullahi Nur, the secretary-general of Somalia’s presidency, had been kidnapped by armed men from his home. Omer was released Sept. 29 after more than a week in captivity. A video published online last month shows him with cuts on his face and neck.

The Associated Press contributed to this report.