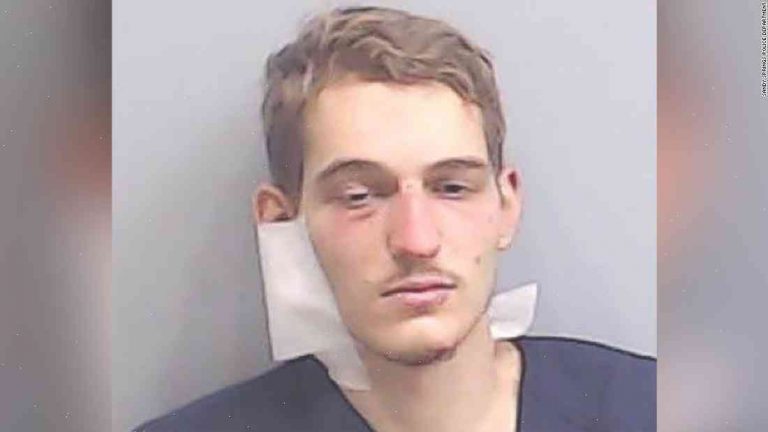 A man accused of murdering a police officer and wounding another man in a Washington DC suburb has a history of attacks on law enforcement, a prosecutor says.

Joseph Kadlec, 32, is accused of killing Katie Beers, 26, an undercover cop posing as a drug dealer.

The suspect’s brother, 40-year-old James Kadlec, has been linked to the September attack in which an off-duty officer was killed.

Police say Mr Kadlec killed Trooper Kim Taylor, 37, as he made a drug bust near the Pentagon. He then fled to his home in Lorton, in Maryland, where he continued to attack a man police believed was his brother, James.

The suspect ran into the woods nearby and was cornered by officers wearing riot gear and armed with shotguns, machetes and fully automatic rifles.

His two brothers were among the first people shot after the assault began. A bystander who witnessed the scene at the townhouse said James was wearing a maroon T-shirt with a patch on the back in the colours of a Philadelphia football team, the Eagles.

Images shared on social media showed Mr Kadlec, who works for the FBI, running into the woods, gun in hand.

“James worked for over 11 years to contribute to this country. He was a wonderful father, brother, nephew and a loved member of this community,” Acting US Attorney Jessie Liu said.

Mr Kadlec’s bond hearing is set for Thursday. According to online court records, the suspect has a lengthy criminal record which includes allegations of assaulting and resisting police.

ABC7 reports Joseph Kadlec has pleaded guilty to assaulting a court officer and burglary of a motor vehicle. He was sentenced to 17 months in jail, ABC7 reported.

The suspect was held without bond after his arrest, CNN reported.

Mr Taylor, a specialist in terrorism cases, is among two security personnel killed in US violence within a month.

Two employees of the Smithsonian Museum of Natural History in Washington were killed in a September shooting, and another gunman killed two police officers and wounded four other civilians in Austin, Texas, last week.

Japanese Cooking: How to Enjoy the Many Styles of Japan