Islamist party said gunman had sent message to Palestinians that he wanted to strike Israel or the US, either by blowing himself up or by attacking others A gunman shot and killed one Israeli… 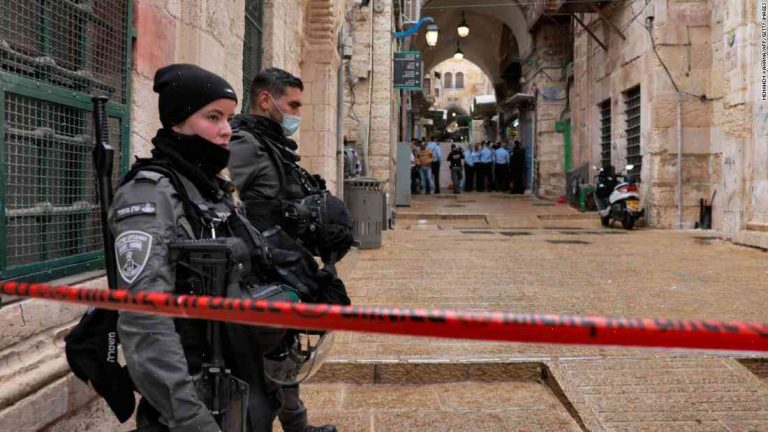 Islamist party said gunman had sent message to Palestinians that he wanted to strike Israel or the US, either by blowing himself up or by attacking others

A gunman shot and killed one Israeli and wounded four more in Jerusalem on Wednesday night in an attack claimed by Hamas. The attacker, apparently a member of the Islamist movement, was shot dead by police.

Israeli police said the assailant had sent a message on a social media platform using a pseudonym saying he wanted to carry out an attack in Israel or the US. The Israeli news media said the message asked which service would be easier.

A second Facebook post, apparently by the same shooter, condemned “the American and Israeli authorities”, urging followers to “be ready to leave the State of Israel.”

Israeli police said the gunman arrived at an intersection and shot at civilian vehicles in a group of cars travelling to the parking area of a shopping mall. He was confronted by Israeli police, who shot him dead, police said.

The victims of the attack were from a number of groups, including one on a public bus and another stopped at a crossroads.

One of the four wounded was in serious condition, and police said the other three were moderately injured.

The Jerusalem Magistrates’ Court announced it had cancelled a hearing for a Hamas activist later in the day and said that, until further notice, all prisoners in its premises were to undergo home detention.

In its claim of responsibility, Hamas said in an English-language statement: “The movement claimed responsibility for the heroic army operation in Jerusalem.”

The statement added: “The soldier, who carried out the attack against the dens of evil, is one of the soldiers with the resistance who will continue to defend Palestine.”

Hamas’s armed wing had pledged responsibility for the attack, in which two of the injured were police officers.

There was no immediate claim of responsibility from the Islamic Jihad militant group.

Israeli prime minister Benjamin Netanyahu called the shooting a “cowardly terror attack” and paid tribute to the person who was killed.

“The murder was carried out in a place where there were children and elderly people … I hold Hamas and its so-called ‘resistance’ responsible for what is happening in Jerusalem,” Netanyahu said.