California news reporter narrowly avoided being wounded by her own cameraman 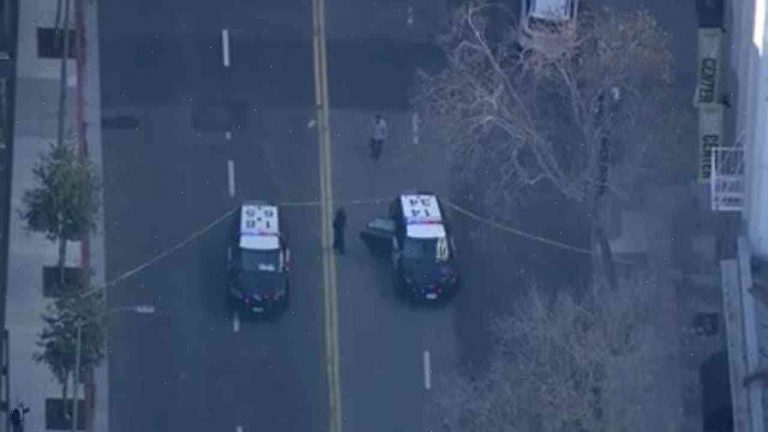 A television news reporter covering a gun shooting in California was in danger of being injured herself after her security guard was shot in the stomach and hacked into pieces.

Eventually the reporter, KQED reporter Dayna Devonish, and her team managed to bring the coverage under control.

As the report went to air, shots rang out. KQED reporter KQED reporter Dayna Devonish did not know where the shots were coming from

KQED reporter Dayna Devonish was about to give viewers a report

KQED’s KQED reporter Dayna Devonish was able to regain control of the broadcast, but was in danger of being herself injured

KQED reporter Dayna Devonish managed to regain control of the broadcast – and her armed security guard, Farris Ramey, who was badly injured

The local CBS affiliate had planned to do a live report about gun shots being fired in the Hollywood district, but was put on hold as employees were ordered out of the building.

The station’s security guards were able to save Devonish’s life after the incident, but only after her cameraman’s phone had been taken from him and used to cut him into pieces.

Security officers also got Devonish to the ground and covered her face – but it was not until they secured the station’s building that they realised her cameraman, Anthony Marsala, was unharmed.

The episode brought back memories of the 1996 Oklahoma City bombing, in which one of the TV station’s security guards was among those killed by the bomb.

During a news conference on Saturday, KQED said it was keeping a closer eye on its security guard as a precaution, and was urging viewers not to bring guns into the newsrooms.

The broadcaster added: “We are not overreacting – we are under threat.”

Please take a moment to share your thoughts in the comments section below.

Statements to Live By!

Even Boots is having a Black Friday sale